The Horrors of the Holocaust Continue

It never ends: "Gruesome discovery in Germany raises questions about Holocaust-era experiments. Investigation launched into discovery at German research institute of dozens of anatomical remains believe to be from victims of Nazis, according to Army Radio. According to the report, the mostly brain and brain parts found in the building were remains from those murdered in Nazi human experiments, which were inhumanely conducted on prisoners including children, the mentally ill and people with disabilities during the Holocaust.The remains were found at a branch of Munich's Max Planck Institute, which was originally founded as the Kaiser Wilhelm Institute that was strongly associated with Nazi theories of racial eugenics. The institute regularly received human body parts from Nazi members such as the infamous Auschwitz physician Josef Mengele."
John Kerry should tell the media to downplay this report, so people (especially Holocaust-deniers) don't know what's going on.
Posted by Oxmyx at 8/31/2016 12:11:00 PM No comments:

Keep Calm and Kerry On

That genius John Kerry is at it again.  The man who said global warming is as big a threat as terrorism now wants the media to stop covering terrorism so much so that "people wouldn't know what's going on." Maybe he'll get the Nobel Peace Prize for that brilliant suggestion.

Thanks to the fawning, compliant Obama media, the people already haven't known what's been going on these past eight years!
Posted by Oxmyx at 8/30/2016 10:18:00 PM No comments:


Here's a nice tribute to Gene Wilder, who died today. His portrayal of Willie Wonka made it one of my favorite film characters, and the movie second only to The Wizard of Oz for kids of all ages.
Posted by Oxmyx at 8/29/2016 07:36:00 PM No comments: 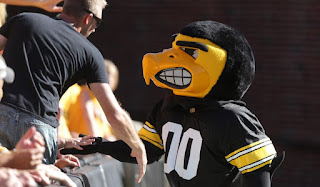 Here's the whining babies story of the day. I'd like to know how these spoiled brats are ever going to deal with the stress of everyday life, handling a job, or coping with real trauma if this sort of nonsense is constantly encouraged:  "A University of Iowa professor is asking the athletics department to make the university’s mascot, Herky the Hawk, display friendlier facial expressions, arguing that his angry grimace is traumatizing students."
Posted by Oxmyx at 8/27/2016 11:01:00 PM No comments:

The Economy is Booming! 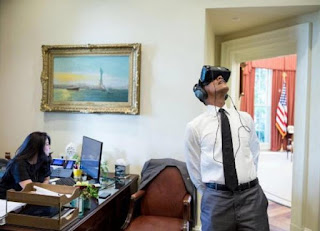 I love the caption contest over at Zero Hedge, but even more than that, I like what it says about the latest Obama administration lies on the economy:  "And, just this morning, White House propagandist Earnest exclaimed "Obama's economic optimism is widely shared." The problem is... that's total bullshit...The professionals don't believe it."

Doesn't this remind you about the economic news right before the 2012 election?

In less than a month we'll be commemorating the 15th anniversary of the horror that was September 11, 2001. The History Channel will be showing some excellent documentaries on September 5, so make sure you watch and remember. Go to this History Channel web page to share your thoughts.
Posted by Oxmyx at 8/25/2016 07:30:00 PM No comments:

Julian Assange claims to have some bombshell leaks in the works about Hillary Clinton and the Democrats. “I think it's significant,” he said. “You know, it depends on how it catches fire in the public and in the media.” Do you honestly think the media will report anything damaging to the Clintons before the election?  And do you think a public obsessed with Pokemon will even care at all? If the subject isn't a Republican, it seems nobody cares.

An Oldie But Goodie 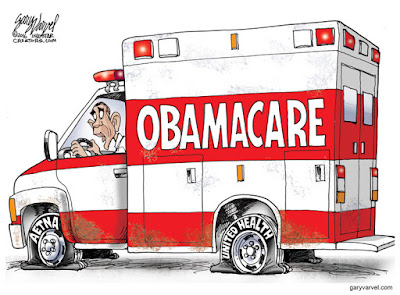 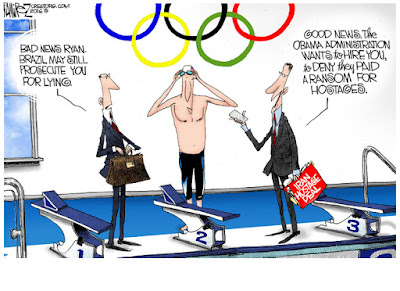 I guess they can't blame George W. Bush this time, so Hillary is blaming Colin Powell for her e-mail scandals! Boy, these people are shameless. At least he's fighting back instead of falling on his sword for her.
Posted by Oxmyx at 8/22/2016 07:46:00 PM No comments:


I hate most TV commercials and am tired of seeing 9-12 annoying, noisy ones in a row, but I just love this adorable commercial for Konica Minolta printers!
Posted by Oxmyx at 8/21/2016 10:23:00 PM No comments:

In his latest column, Greg Crosby says what I have always said: bring back shame.  He writes, "Think about this. If people who engaged in lying, cheating, stealing, freeloading, not taking care of their family, and not pulling their own weight in society were made to feel ASHAMED of themselves instead of feeling like victims, maybe more people would want do the right things. Maybe we would even find our American character again. It's worth a try."
Posted by Oxmyx at 8/19/2016 10:43:00 PM No comments:

Read all about it at Betsy's Page, Larwyn's Linx, and Maggie's Farm.

Regarding the awful flooding in Louisiana, I'm still waiting for this administration, or the Democrats, to somehow blame Bush for it.
Posted by Oxmyx at 8/19/2016 12:23:00 PM No comments:

Men Who Won't Man Up

The story about Ryan Lochte and the Olympic swimmers being robbed at gunpoint reminds me of how golfer Robert Allenby claimed to have been mugged.

You get drunk or you get into some other embarrassing predicament? Why tell the truth if you can lie your way into being seen as a victim!

Enjoy the latest amusing column by Argus Hamilton, which includes news items like this one: "Hillary Clinton cited her huge lead over Donald Trump in Pennsylvania polls Monday during her speech in Scranton. There were a lot of high-fives in the room. The Democrats are so confident of winning this election, they're going to release President Obama's original Kenyan birth certificate."
Posted by Oxmyx at 8/16/2016 10:30:00 PM No comments:

Here we go yet again. The FBI or the police ought to visit major U.S. cities and give lessons on how to behave properly when stopped by cops; and how to act like civilized human beings instead of looting, rioting, and burning down buildings.  That sort of behavior should be condemned, not condoned. Also, they ought to show episodes of  "Cops" so people can see what the police are faced with every single day.

What a perfect man to represent the United States as our Olympic Bronze Medalist!  He has done something no other golfer has done, not even the Golfing Messiah, Tiger Woods, and I'm sure all golf fans are proud of smiling Matt Kuchar today.
Posted by Oxmyx at 8/14/2016 05:46:00 PM No comments: 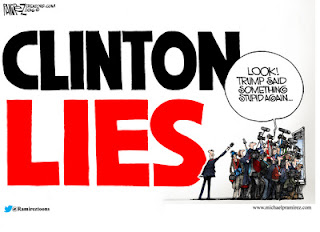 As usual, Michael Ramirez has a great way of telling a story!

The Council has spoken! Here are this week's Watcher's Council results!  Even if the posts weren't well-written, it'd be worth a look if only for that old photograph at the top.
Posted by Oxmyx at 8/12/2016 10:37:00 PM No comments:

David Moulton echoes my own feelings about Alex Rodriguez:  "Would you honor a guy who you paid 350 million dollars to over 13 years under a largely false premise (that he was clean)? Would you allow a guy to hang around for one extra hour, who just three years ago sued you and your team doctor, only after trashing you and your organization for weeks in the press? Oh yeah, and everything he said and did was a complete lie.
"I thought the water in Brazil was sketchy but what are they drinking in the Bronx? Hank Steinbrenner says it is possible one day that A-Rod may be honored with a plaque in Monument Park. What? Alex Rodriguez's time with the Yankees has more resembled a plague than is worthy of a plaque."
Posted by Oxmyx at 8/12/2016 10:20:00 PM No comments:

Ho-hum -- yet another scandal.  Imagine the uproar and huge headlines if the current administration were Republican rather than Democrat:  Obama admin blocked FBI probe of Clinton Foundation corruption: Report. Just think about that headline for a minute.
Posted by Oxmyx at 8/12/2016 10:13:00 PM No comments:

Every week the world gets more insane, and you can count on Betsy's Page, Larwyn's Linx, and Maggie's Farm to keep you informed.

Here's a great column from WQXR called 9 Classical Music Works Inextricably Linked to the Olympics. Every time I hear the beginning of Bugler's Dream, I think not only of the Olympics but also of ABC's Wide World of Sports and Jim McKay. Have a good listen!
Posted by Oxmyx at 8/09/2016 10:02:00 PM No comments:

Outrageously sickening hot-car story of the week: Police arrest father after twin girls die in hot car. The word "father" should be in quotes.  The only way to stop this is to punish the so-called parents the same way: leave them to die in a hot car!
Posted by Oxmyx at 8/05/2016 06:47:00 PM No comments:

Every day, the Obama Administration is embroiled in yet another scandal that they somehow manage to get away with.  Here's the latest, as Doug Powers puts it:  Uh huh: WH says $400 million delivered to Iran on day prisoners freed was ‘coincidence’ and not ransom.

"State Dept. spox John Kirby said the timing was just a coincidence because the money wasn’t ransom but rather part of a $1.7 billion bribe to get the Ayatollah to sign off on the Iran deal settlement “to resolve a decades-old dispute over a failed arms deal signed just before the 1979 fall of Iran’s last monarch, Shah Mohammad Reza Pahlavi.” This administration will try to sell you the Brooklyn Bridge just as soon as they’re finished buying it from Iran."

Barack Obama and Hillary Clinton are shameful, brazen liars who know they will be protected by their adoring press.  Do you really want to elect someone who will continue to engage in money laundering with the enemy?
Posted by Oxmyx at 8/03/2016 10:24:00 PM No comments:

Unfit to be President

It's pot calling the kettle black time. If anyone knows about being unfit to be President, it's Barack Obama.  As Charles Hurt writes, "Well, at least this is one area where the president is a bona fide, qualified expert."
Posted by Oxmyx at 8/02/2016 10:45:00 PM No comments:

In Argus Hamilton's latest column, you can find news zingers such as this one: "The Washington Post slammed Hillary Clinton for telling Fox News that the FBI Director did not say she lied about sending classified material over her private e-mail server. He clearly said Hillary didn't tell the truth. What's even more outlandish, she said how nice it was to be on Fox News."
Posted by Oxmyx at 8/02/2016 06:10:00 PM No comments: