I was sorry to hear about the death of John McCain. I voted for him in 2008, but it's as a POW that I mainly think about him, remembering how he decided to remain a prisoner rather than be released early. That's the definition of courage and sacrifice.
Posted by Oxmyx at 8/25/2018 09:03:00 PM No comments:

Bonus, as seen at Lucianne.com: "Britain's longest-serving poppy seller has died at the age of 103, nine days after being presented with her MBE for 97 years of service." How's that for being an embodiment of the greatest generation?
Posted by Oxmyx at 8/23/2018 09:05:00 PM No comments:

I love this story from WQXR:  "How much Verdi is too much Verdi? According to lawmakers in the Slovakian town of Štúrovo, the answer is approximately 5.6 million minutes. Yes, you read that correctly. Frustrated by the barking of a neighbor’s dog, a woman only identified as Éva N. took to blasting a four-minute aria from Il Trovatore, nonstop, from morning till night ... for 16 years. Even though the pet eventually died, Eva kept it up until she was detained by police and charged with, according to the BBC, 'harassment and malicious persecution.' If convicted, she’s looking at six months to three years of jail time. Your call on whether or not that’s a bit harsh. Needless to say, neighbors are relieved. In the BBC’s report, one woman told a Hungarian news outlet, 'I love Plácido Domingo, but not like this!'"
Posted by Oxmyx at 8/22/2018 08:44:00 PM No comments:

No Sympathy for Nazis

Good riddance:  "At the order of President Donald Trump, Immigration and Customs Enforcement agents removed 95-year-old Jakiw Palij from his Queens, New York, home on Monday.
Justice Department officials say Palij served as an armed guard at a death camp in Nazi-occupied Poland and later lied to American immigration officials about his role in those atrocities when he entered the U.S. after the war.  ABC News was there when Palij was removed by wheelchair from his home on Monday, but he did not answer any questions. Looking frail with missing front teeth visible through his white beard, the only noise he made was a pained howl as agents hoisted him from his wheelchair onto the ambulance stretcher."

Tsk, tsk. Yet another case of a Nazi having the opportunity to reach a very old age, and right here in our country, while the victims he helped murder never got that chance. Frail and howling? He should first suffer, along with the other Nazis still unfortunately alive!
Posted by Oxmyx at 8/21/2018 09:22:00 PM No comments:

This is what we can use more of today, per Harold Ticktin's Yiddish Vinkl column: "menschlichkeit, graciousness, good manners; literally acting like a human being."
Posted by Oxmyx at 8/17/2018 08:59:00 PM No comments:

Start off the weekend with these news and culture roundups from Betsy's Page, Maggie's Farm, Larwyn's Linx, and Liz Sheld's Morning Brief.

Let's face it: the left can't stand us, and they don't think much of our country, either. I'm going to stop pretending that we can all reason together, because we just don't have that much in common any more.
Posted by Oxmyx at 8/17/2018 08:52:00 PM No comments:

Is this obsession with, and encouragement of, public defecation and urination the latest leftist fad? Every day there's another story about this disgusting, unsanitary habit. Today alone I saw the news of a school superintendent, urinals in the open in Paris, and San Francisco city workers called Poop Patrols forced to clean up the revolting mess left by homeless bums. Isn't that amusing? Why aren't these pigs being forced to clean up their own mess? Maybe when people start getting sick from these nauseating conditions, someone will take it more seriously as the unacceptable health risk it is.
Posted by Oxmyx at 8/15/2018 06:16:00 PM No comments:

Read Let's Review 112: Of Chicken Diapers and “I denounce myself being Black!” over at American Digest, and Loose Ends 41 at Powerline. It's always fun to come across things like this during my lunch break.
Posted by Oxmyx at 8/15/2018 06:06:00 PM No comments:

United We Stand Against Jeremy Corbyn

Here's a real show of solidarity against anti-Semitic politics. From World Jewish Daily: All three U.K. Jewish newspapers, normally fierce competitors, published the same front-page editorial on the danger posed by the antisemitic Labour party and its Jew-hating leader Jeremy Corbyn.  'We do so because of the existential threat to Jewish life in this country that would be posed by a Jeremy Corbyn-led government,' stated the editorial."

The National Review doesn't mince words in its headline: Jeremy Corbyn, Anti-Semite. Julie Lenarz writes,  "Corbyn would not be where he is today without his league of faithful minions, who will go to any length to explain away what is right there in plain sight — Corbyn’s long history of apathy toward anti-Semites." Imagine what Winston Churchill, with his marvelous use of language, would have had to say about this villain!
Posted by Oxmyx at 8/14/2018 06:30:00 PM No comments:

I liked these comments on world events by humorist Hamilton:


"Venezuela's socialist economy fell apart on Tuesday just as newly-elected Democratic House members were urging primary candidates to back higher taxes, Medicare for all and free college. It seems every generation has to learn the same lesson. A sardine is a whale after ten years of socialism."


"The New York Times ran an editorial calling for the elimination of the Constitution saying it's anti-democratic. New York liberals need to make up their minds. In the morning, they say minorities are oppressed by the document because it was written by conservative white men, then in the evening they pay eight hundred dollars a ticket to give Hamilton a standing ovation for writing it."
Posted by Oxmyx at 8/13/2018 08:36:00 PM No comments:

And here's a story that shouldn't surprise anyone. It demonstrates again the lengths these radical Muslims will go to to kill Americans:  "The man arrested at a squalid New Mexico compound is the son of a controversial Brooklyn imam who was on a list of people who 'may be alleged as co-conspirators' to the 1993 World Trade Center bombing, according to court documents released by prosecutors Wednesday...Authorities found 11 children and four adults living in 'filthy' conditions at the compound Saturday in Amalia, New Mexico. Prosecutors also alleged in court documents that Wahhaj, 39, was teaching the children to commit school shootings." Get these terrorists out of our country, now!
Posted by Oxmyx at 8/09/2018 09:01:00 PM No comments:

American Thinker points out the difference between leftwing mobs and leftwing protesters in this column: "According to a quick dictionary check, a mob is a large crowd of people, especially one that is disorderly and intent on causing trouble or violence. In other words, a mob is not a group of people having a serious disagreement over policy.  A mob is not into seriousness, but rather causing trouble.  A mob wants to punch your face rather than hear your opinion.

Here's Let’s Review 110: Straws In the Wind, the latest link roundup over at American Digest.

Get a load of this headline:  Saudis Threaten Canada With Another 9/11 Amid Diplomatic Crisis. Note that the diplomatic crisis doesn't involve Trump or America; instead, it involves the liberal boy wonder, Justin Trudeau. Our media must be so disappointed!
Posted by Oxmyx at 8/08/2018 08:47:00 PM No comments:

If you're one of those people who think America was somehow evil for dropping the bomb on Japan, then read this article titled No Choice: Why Harry Truman Dropped the Atomic Bomb on Japan: "Imagine if Truman had decided to hold back. The war ends, with yet more massive bloodshed, probably at some point in 1946. Truman at some point reveals the existence of the bomb, and the president of the United States explains to thousands of grieving parents and wounded veterans that he did not use it because he thought it was too horrible to drop on the enemy, even after a sneak attack, a global war, hundreds of thousands of Americans killed and wounded in two theaters, and years of ghastly firebombing. Seventy years later, we would likely be writing retrospectives on 'the impeachment of Harry S. Truman.'"

End your busy week with some good reading at Larwyn's Linx, Betsy's Page, and Maggie's Farm!

Daniel Greenfield at Sultan Knish discusses San Francisco and its filth and ridiculous bans:  "During the Gold Rush, legend had it that the streets of San Francisco were paved with gold. These days they’re layered with human waste after the socialist city legalized public urination and defecation. A bag of 20 pounds of human waste was deposited on the street. Urine corroded a pole so badly that it fell on a car almost killing the driver. But don’t think that you can get away with anything in San Francisco.

San Francisco decriminalized public defecation, but criminalized plastic straws. While bench warrants for public urination are discarded, the straw fines are real and expensive. A California statewide bill goes further with a threat of six months in the county jail for giving a man a straw. When drugs are legal and straws aren’t, the Mexican cartels will soon switch to smuggling drinking straws into California."

Here's some La Boheme opera heroics for you, as seen at the WQXR blog and the Evening Standard:  "When Ayan developed vocal difficulties in Act II, Castronovo jumped up to sing his part from the wings, while Ayan continued acting the part."

(This is a classier and more difficult version of the end of "Singin' in the Rain", when Debbie Reynolds is singing behind the curtain while Jean Hagen mouths the words in front of the audience.)
Posted by Oxmyx at 8/02/2018 09:12:00 PM No comments: 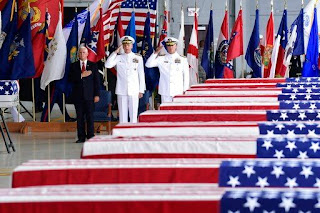 What a touching honorable carry ceremony today at Hickam Field in Hawaii for the 55 Korea War vets!  I couldn't look away from the TV images, and I felt very proud of my country at that moment.
Posted by Oxmyx at 8/01/2018 09:02:00 PM No comments: