You can't go wrong when you get your weekly dose of news and culture from Betsy's Page, Maggie's Farm, and Larwyn's Linx.

Why do candidates like Cruz think that picking a female running-mate will make people rush to vote for them? To me, pandering that way is insulting.

Here's something wonderful to look at, courtesy of American Digest. The catchy tune is called "Guilty", and here's another version of it.
Posted by Oxmyx at 4/22/2016 10:48:00 PM No comments:

How has this country fallen so far so fast?  "Schilling, who led the Red Sox to their first World Series victory in 86 years in 2004 by carrying the team through the American League Championship Series against the New York Yankees by literally pitching on an ankle so busted his sock was bleeding, was fired from ESPN this week for siding with the majority of America on the transgender public restrooms issue."

So, if you don't immediately jump on the ever-more-insane liberal bandwagon, you can be fired now? Are you kidding?

Curt Schilling, the state of North Carolina, and  the millions of people with common sense and traditional, normal ideas of morality and decency, have nothing whatsoever to apologize for.  If anything, the minority should be the ones to apologize, and the sooner the better so we can get on with the truly important issues instead of these PC fads. Boycott and whine away -- we know we're right!
Posted by Oxmyx at 4/22/2016 10:26:00 PM No comments: 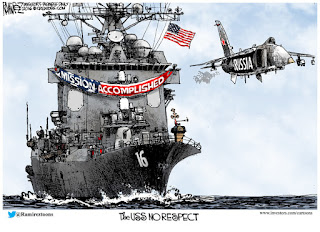 Thanks to Betsy's Page, Maggie's Farm, and Larwyn's Linx, you're pretty much covered for the week in news and culture. Don't miss it!

The murderer Leslie Van Houten may actually be paroled this time. Remember, she has suffered enough.
Posted by Oxmyx at 4/19/2016 10:49:00 PM No comments:

Argus Hamilton's latest column includes this item you never would have believed years ago: "Houston police said a local man accidentally committed suicide because he held a pistol in one hand and an iPhone in the other and he took a selfie with the wrong hand. You can’t make it up. It’s just more scientific proof that the universe is made up of protons, neutrons, electrons and morons."  I looked this up and saw that although a similar incident actually occurred in 2015, Hamilton's comment about the universe is truer than ever.
Posted by Oxmyx at 4/19/2016 10:44:00 PM No comments: 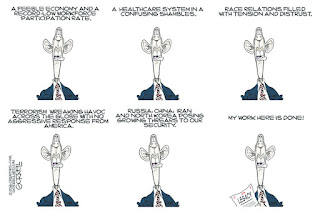 The Council has spoken! Here are this week's Watcher's Council results.

(Bob Gorrell has a great cartoon about Obama, speaking of weasels.)

Here are this week's excellent news and culture roundups, thanks to Betsy's Page, Maggie's Farm, and Larwyn's Linx.

The United States of Outrageousness 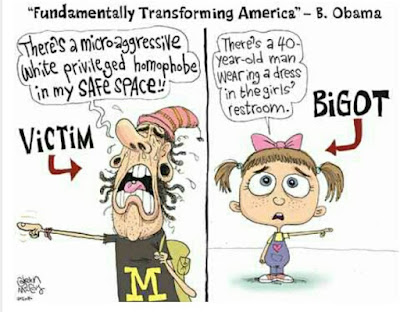 This Glenn McCoy cartoon, as seen at Lucianne.com, pretty much sums up the sick and bizarre change in our society that has made everything that used to be unacceptable not only acceptable, but also encouraged by president, media, and celebrities alike. According to them, if you're not a liberal, then you must be a villain.  Let's stick to our guns and refuse to cave in to politically correct fads and ultraliberalism.
Posted by Oxmyx at 4/13/2016 12:19:00 PM No comments:

"No Place For Jews"

Here's yet another report on antisemitism in Sweden. It makes you feel as if you're reading the news from the 30's and 40's when you see things like this:  "Visiting Sweden late last summer, this reporter witnessed the fear and discomfort Jews in Sweden now feel.  In discussions with Swedish Jews, I was told of avoidance to wear Jewish identifying symbols such as a kippah or a necklace with a Star of David.  Ralph, 29, a veteran of the Swedish army, put it plainly by stating, 'There is no place for Jews in Sweden.' He added that he was planning to move to the U.S.  Many young Jews have moved to Israel.
A synagogue in central Stockholm had its windows boarded to hide the fact that it was a Jewish place of worship.  There was no sign at the entrance to mark it as a synagogue.  This was not happening in a remote village but just a few miles from the seat of the Swedish government and its people’s parliament."
Posted by Oxmyx at 4/12/2016 10:22:00 PM No comments:

"If Obama Goes to Hiroshima - Editorial of The New York Sun | April 11, 2016. Americans are already dreading the prospect that President Obama is going to make a visit to Hiroshima to apologize for our use of the atomic bomb against the Rising Sun. Supposedly no decision has been made on this head, but the Post newspaper in Washington reports that aides to the President 'have begun exploring the possibility of Obama spending several hours in Hiroshima' when he is in Japan in May. Let us just say, no good can come of it."  (As seen at Lucianne.com.)


Obama should be seen and not heard.

Obama Headline of the Day

The Council has spoken! Here are this week's Watcher's Council results!  The winner is Joshuapundit’s So, Why Not Dump Israel? in which he asks,  "Why all this fuss about Israel? Aren't they nothing but trouble for America?" He'll then tell you why Israel is anything but trouble!
Posted by Oxmyx at 4/09/2016 09:52:00 PM No comments:

It's rare that you have a Democrat who tells the truth without shading it in politically correct terms. Bill Clinton -- a Democrat and a former President,no less --  had the courage to say what nobody else will say.  The New York Post describes what happened: In a fiery comeback to Black Lives Matter hecklers Thursday, Clinton defended his own anti-crime policies as well as his wife Hillary’s 1996 reference to thugs as 'super predators' — for which she’s apologized.  'I don’t know how you would characterize the gang leaders who got 13-year-old kids hopped up on crack and sent them out into the street to murder other African-American children,' Clinton said. 'Maybe you thought they were good citizens. [Hillary] didn’t.'  Bill ripped the BLM folks for 'defending the people who killed the lives you say matter' and challenged them to 'tell the truth.'

Now that's the way you deal with agitators, rioters, looters, and cop-killers - and you don't apologize for it.

"Sanders yet to correct false claim Israel killed ‘over 10,000’ Palestinian innocents." Yet how come there isn't the outrage over his remark the way there is over anything Trump says?

Here's the reliable Argus Hamilton with a new super-sized column of his take on the news, including these items:

"The Labor Department said unemployment was at five percent in March, not counting millions who aren’t looking for work. The Puritan work ethic isn’t for everybody. The welcome sign at the entrance to West Hollywood notifies visitors that You Are Now Entering a Work-Free Drug Place."

"Bernie Sanders swept three primaries in Western states on Saturday due to Bernie’s appeal to college kids and liberal Democrats. His campaign has inspired a new drinking game across the U.S. Every time Bernie Sanders proposes a free government program, you drink somebody else’s beer."
Posted by Oxmyx at 4/05/2016 10:04:00 PM No comments:

Forget about politics for a minute and listen to this music.