I saw the acclaimed Italian film "La Strada" for the first time this week and couldn't tear my eyes away, especially during the performance of the character Gelsomina.  What a face, and what acting.  Since then, I haven't been able to get the theme song out of my head. Now that's the mark of a great movie - when you can't forget it.
Posted by Oxmyx at 2/22/2019 08:33:00 PM No comments:

I was delighted to see one of our favorite family expressions in the February 15 edition of Harold Ticktin's Yiddish Vinkl: Nisht dir gedacht, which we always translated as "you shouldn't know from it"!
Posted by Oxmyx at 2/21/2019 08:41:00 PM No comments: 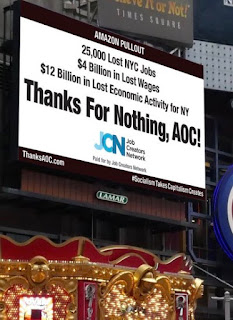 There are some excellent posts today at Maggie's Farm, Larwyn's Linx, and Liz Sheld's Morning Briefing!

At Maggie's Farm, make sure you read the article about Oscar Levant titled "The Man Who Wasn't Gershwin."

The above image comes from her blog as well. What kind of people don't want the opportunity to have 25,000 jobs? I guess the reason you don't see the unemployed marching in protest is because they know they'll be paid anyway under the hideous AOC's "Green New Deal".  And to use the famous FDR phrase "New Deal" is an insult. At least he put people to work!

The other day I referred to James Dellingpole's column "Yeah, Let’s Welcome Back the Jihadi Bride Who Is ‘Unfazed’ by Severed Heads", about the British creature. He could have also be describing the ISIS member who wants to come home to Alabama with her ISIS baby.

ABC.com's article deliberately sets out to make her sound harmless: "A young mother who married ISIS fighters and is currently staying in a refugee camp in Syria is begging to return to her family in Alabama with her toddler son."

Awww! Let's all take up a collection for her. Unlike ABC and other gullible idiots who think that terrorist-traitors like this deserve a second chance, I can easily picture her blowing herself up in a crowded Mall.

Does anyone remember this? 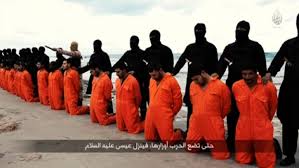 Joe Biden is The Real Embarrassment

I see Joe Biden was reliving Obama's apology tour when he claimed, in Munich, that America is an "embarrassment".

John Hinderaker at Powerline writes, "I haven’t seen a full transcript of his remarks, but he delivered a partisan stump speech to an audience of European leaders. It consisted largely of an attack on the President of the United States. I’m so old, I can remember when that was considered bad form.


Speaking on German soil 75 years after the U.S. and its allies prepared for D-Day, Joe Biden described America as 'an embarrassment' and its trade policies 'self-defeating.'"

Whose Side Are They On?

I was angry when I heard that "Protests across the nation are planned Monday in response to President Donald Trump's national emergency declaration. The protests are being planned from New York and North Dakota to California and Texas all to counter the order Trump signed Friday, which freed up billions to construct a wall along the southern U.S. border with Mexico."

Excuse me, but exactly whose side are they on, ours or Mexico's?  Are they on the side of American citizens in the United States, or illegal aliens crossing into our country via Mexico?  These protestors had better get their priorities straight.
Posted by Oxmyx at 2/18/2019 12:31:00 AM No comments:

Yawning Over a Potential Overthrow

Remember the movie "Seven Days in May"? That was fiction.  Here's Eight Days in May, which is fact. Per Byron York, "The short version is: The reports were true. Deputy Attorney General Rod Rosenstein really did discuss wearing a wire to secretly record the president. Rosenstein and others did discuss invoking the 25th Amendment to remove the president from office. And the FBI did adopt an aggressive new investigation strategy, targeting the president himself, almost instantly after the Comey firing."

Where's the Woodward-and-Bernstein-like investigative reporting? Where are the perp walks? Instead, the media and the public seem to be more outraged over some celebrity hate crime hoax.
Posted by Oxmyx at 2/15/2019 08:24:00 PM No comments:

Thank heavens it's Friday, and time for some great reading at Liz Sheld's Morning Briefing, Maggie's Farm, and Larwyn's Linx!

I'm sure some idiots will actually feel sorry for this ISIS-supporting creature, who has the nerve to return to England (and the dole) as if nothing happened.  Read James Delingpole's column, which Breitbart has headlined Yeah, Let’s Welcome Back the Jihadi Bride Who Is ‘Unfazed’ by Severed Heads.
Posted by Oxmyx at 2/15/2019 08:15:00 PM No comments:

In his excellent column today at American Spectator, Dov Fischer spells it out for those who haven't recognized it - or who refuse to:

"See the progression of the Progressives?

This Jew-hating creature should be immediately removed from the Foreign Relations Committee:  "Rep. Ilhan Omar, D-Minn., was condemned Sunday by fellow Democrats after she accused a pro-Israel lobbying group of paying lawmakers in exchange for influence. The latest controversy engulfing the freshman lawmaker centered on tweets she sent reacting to journalist Glenn Greenwald criticizing House Minority Leader Kevin McCarthy, R-Calif., for threatening punishment against Omar and Rep. Rashida Tlaib, D-Mich., over their criticisms of Israel. 'It´s all about the Benjamins, baby,' Omar said in one tweet, quoting a lyric from the 1997 song by rap artist Puff Daddy."

New York's state of mind isn't a good one these days. You just had Cuomo signing a law allowing abortions up to the time of birth, and lighting up NY landmarks in celebration. Now people are  protesting the 25,000 jobs that Amazon headquarters will bring to New York; and Obama Jr. (the fawned-over, redistributor of wealth Ocasio-Cortez) is promising "economic security for those unable or unwilling to work."  Think of it - you should support people who choose to protest the arrival of plenty of jobs, and who are unwilling to work! Well, hopefully Amazon will relocate to a city whose leaders are grateful and whose people actually want to work.  Everyone else can go sign up with the Green Queen.
Posted by Oxmyx at 2/08/2019 05:00:00 PM No comments:

Catch up on this week's news and gossip with Liz Sheld's Morning Briefing, Maggie's Farm, and Larwyn's Linx! 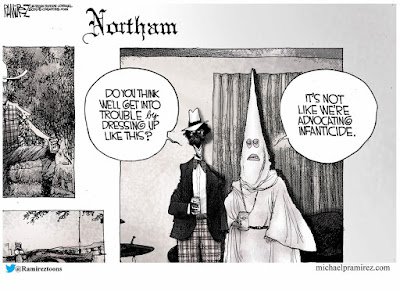 The following is from Trump Triangulated at SOTU and Democrats Schiffed Their Pants - by DIARY / GBenton:

"It turns out a bad speech for Democrats is great news for America.

It turns out the pro-choice billionaire playboy just called out infanticide from the Bully Pulpit.


It turns out the guy some ‘conservatives’ insisted would betray conservatism just declared America will never be a Socialist nation.
You don’t need me to rehash the entire speech, but I do not envy the Democrats tonight.
They are left to stand against:
And in the week that hapless halfwit Virginia Governor Northam gets roasted for blackface/KKK outfits, the sisterhood of the socialist Democrats chose to wear All. White. Suits."

State of the Union

If there's one thing you have to admire about Donald Trump, it's that he has guts. Walking into the House Chamber tonight must have been like walking into a lion's den, or a gladiator's arena, in which the opponent is the entire Democratic Party. Seeking unity with people who preach socialism and want you impeached isn't very feasible, but it was a good try.

As for the Democrat women all dressed in white -- at first I thought they were members of a church choir who were there as guests.  Too bad they weren't.

After all these years, how tragic:

"Christine Lee Hanson was the youngest victim of the 9/11 terrorist attacks. If the bright and playful toddler were alive today, she would be turning 20 later this month.

Eighteen years after the attacks that killed nearly 3,000 Americans, Christine's grandparents, Eunice and Lee Hanson, have fought for justice. After a recent 9/11 case update for the families in New York City, Eunice expressed optimism a that trial date might bet set at last for the five Al Qaeda suspects.

On 9/11, an entire generation of the Hanson family was killed. Eunice and Lee Hanson lost their granddaughter Christine, her father and their son Peter, as well as Peter's wife, Sue Kim. They were heading to California to visit relatives and see Disneyland when their flight, United Airlines Flight 175, was hijacked and slammed into the World Trade Center. Christine's beloved Peter Rabbit was subsequently donated to the 9/11 Memorial and Museum by her grandparents." 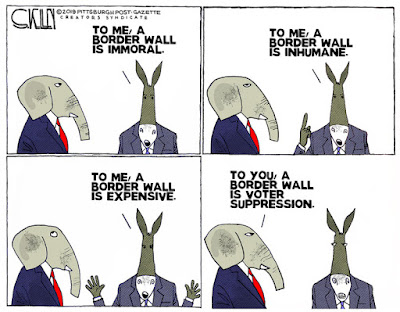 The Greatest: Tom Brady & The Patriots

Congratulations to the 6-time Super Bowl champs! They've just proved again that in terms of leadership, great teamwork, and plain hard work, they're the best.

Tom Brady is and has always been a leader, a role model, a success -- and a nice guy. You haters out there could learn something from him -  if you weren't so embarrassingly jealous.
Posted by Oxmyx at 2/03/2019 10:34:00 PM No comments: