Handshake Diplomacy at the DMZ 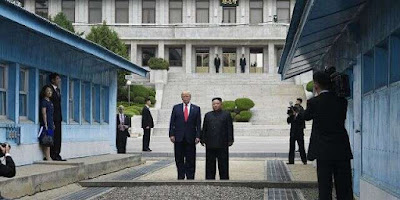 Wow, what a historic moment, and what amazing images! I stayed up overnight just to watch Trump become the first sitting President to enter North Korea. I wondered what would happen if Kim suddenly decided to walk over to the South Korean side and defect. Will the North Korean people see these photos and press accounts, or even know what occurred there?
Posted by Oxmyx at 6/30/2019 02:30:00 PM No comments:

Lively Music to End the Week

Democratic Free For All 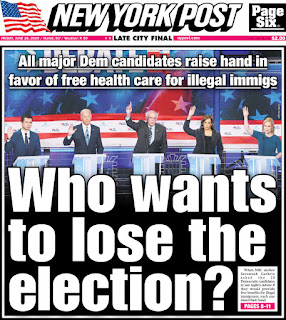 The New York Post front page as seen in this American Spectator debate review really shows what the Democratic party has become.

They no longer represent the American people and the American voters. They now represent the illegal aliens who can illegally vote in the 2020 elections. Keep using the word "free", and the number of people crossing into this country will only increase.  I'm waiting to hear about free welfare, free disability, free cars & auto insurance, free child care, free 401(k) plans.....
Posted by Oxmyx at 6/28/2019 08:40:00 PM No comments:

And make sure to read Daniel Greenfield's sharp and amusing review of last night's Democratic debate. The title alone gives you some idea: "Debate of the Losers -  9 radicals with no shot at being elected to anything redistribute each other’s time." Needless to say, I didn't waste my own time watching it.
Posted by Oxmyx at 6/27/2019 08:09:00 PM No comments:

The resistance has got to stop.  If it's true that it was DHS Chief McAleenan who leaked the news of the ICE raids, then he should be arrested or fired.

Those Wayfair employees who walked out should also be fired. I'm sure there are plenty of people who would take their jobs. Since when is selling beds to the illegal alien detention center such a terrible thing? The illegals ought to be thankful for anything they get, and these protesters should be thankful they have jobs at all.

Also, what's wrong with sleeping on cots? Why do we have to spend so much money on illegals rather than on American citizens? Let their own countries foot the bill. Better yet, have buses standing by at the border to drive the immigrants back home so they don't use up our resources in the  first place.
Posted by Oxmyx at 6/26/2019 08:51:00 PM No comments:

Gavin Newsome, governor of the open sewer that is California, "predicted in a new interview that the GOP will be a third party in America within the next 10 to 15 years due to its 'xenophobia' and 'hypermasculinity'.  Newsom told Axios said the Republican Party is 'finished.'"

The only thing that's going to be finished is the ultra-liberal, pro-Socialist, antisemitic Democratic party, which thinks that anything that's normal is bad, and everything wrong is fine. Keep calling for everything to be given away for free, without any personal responsibility whatsoever.

Don't forget to read Argus Hamilton's column, including this take on the news: "The White House told the business community that Trump will try to iron out trade disputes at the G-20 Summit. India imposed retaliatory tariffs on the U.S., and they took effect immediately. I just phoned tech support and the guy told me to get the laptop working my damned self."
Posted by Oxmyx at 6/20/2019 08:53:00 PM No comments:

Droning On About War

If Iran had shot down a plane with people aboard, then we would have the right to retaliate.  Shooting down a drone at least didn't results in American deaths, and for that we should be grateful. But I despise them just the same.
Posted by Oxmyx at 6/20/2019 08:41:00 PM No comments:

Hey, AOC: Shut Up! The Southern Border is NOT The Holocaust!

Shut up, all you idiots and Holocaust deniers who somehow compare everything to the Holocaust. You make me sick! The detention centers for illegal aliens have no resemblance whatsoever to concentration camps. Are the illegals packed into trains, starved, made to dig their own graves before being shot, thrown into gas chambers and ovens?

Illegal aliens are pouring into our country, being given drivers' licenses and free stuff, when instead they should be deported back into the countries they came from. They are free -- not experimented on, tortured, and killed. They, and morons like AOC and so many others, should be grateful this isn't the Holocaust!
Posted by Oxmyx at 6/18/2019 05:17:00 PM No comments:

What a touching story this is! And look at the wonderful pictures, too.  From the Daily Mail: 'You never got out of my heart': American veteran, 97, and French woman, 92, who fell in love when he was stationed there during World War II meet again 75 years later in emotional reunion.
Posted by Oxmyx at 6/13/2019 09:02:00 PM No comments:

When I read about "Drag Queen Story Hour" taking place at my childhood library, I wanted to throw up. The liberals never stop indoctrinating, and they always seem to believe that we all think the same warped way.

Here's some tragic news about the so-called "homework gap": "With no computer or internet at home, Raegan Byrd’s homework assignments present a nightly challenge: How much can she get done using just her smartphone?"  Yes, that's just terrible. Yet generations of us managed to do our homework without any technology whatsoever. That's what libraries are for.

Well, here's an old name from out of the woodwork! He doesn't work for Trump, he's not in the Administration, he has nothing to do with this President.  The only reason I can think of for that fool Nadler to have him testify is that he hopes Dean will bring back memories of the Watergate scandal, and a Republican President who would have been impeached if he hadn't resigned. The Dems must figure that, for those of us old enough to have watched the Watergate hearings on TV, the following should be inferred:

Sorry, but that kind of Democratic math doesn't add up at all. The only cancer in the White House these days is caused by the leakers and staffers who want to invalidate this Presidency.
Posted by Oxmyx at 6/10/2019 09:00:00 PM No comments:

Liz Sheld was celebrating "toxic masculinity" today; Maggie's Farm discusses the planning that made D-Day happen; Larwyn's Linx includes an article about Reagan's famous "The Boys of Pointe du Hoc" speech.  Here are some more photos from the Daily Mail.
Posted by Oxmyx at 6/06/2019 08:41:00 PM No comments: 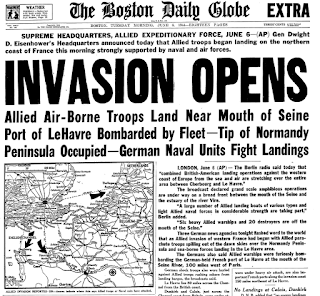 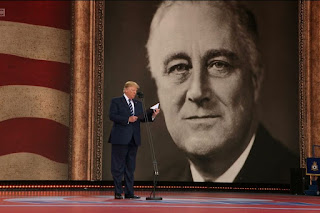 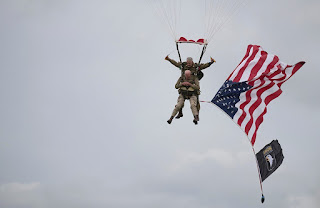 This morning I turned on the TV just  in time to see some of the very touching D-Day commemoration ceremonies from Portsmouth in England, including Trump's reading of FDR's prayer, Sheridan Smith singing Vera Lynn's famous "We'll Meet Again", and Queen Elizabeth's speech invoking her father, King George VI. The photos on the Daily Mail's website today are just marvelous.

Something is Wrong With The Democrats

We already knew that something was wrong with them based on their obsession with the Russia-Trump connection despite evidence to the contrary; and with their choosing impeachment of Trump over productive legislation.

But this headline shows it's even worse than that: "California progressives want the state Democratic Party to link Israeli government to Pittsburgh massacre." The party's fixation on Jews and Israel is really disturbing.
Posted by Oxmyx at 6/01/2019 09:25:00 PM No comments:


This is from a Francois Truffaut film, "The Green Room", based on a short story by Henry James.  I  saw the film on TV and was transfixed from the start, and in this scene, the combination of the music and the images was intriguing.
Posted by Oxmyx at 6/01/2019 09:19:00 PM No comments: