Back in 2015, Netanyahu spoke before Congress and warned us about going through with the disastrous Iran deal. He was attacked, denigrated, and smeared for his attempt. He was of course proven to be right.

Today, he showed more proof of Iran's nuclear capabilities.  I guess the only other thing that may convince the naysayers will be when Iran drops a nuclear bomb on Israel or the United States.

This is something I never thought I'd see: "Kim Jong-un has pledged a "new history" in relations with his neighbour as he became the first North Korean leader to set foot in South Korea since the end of the Korean War in 1953."  It's like the parallel universe in "Star Trek" where they had an evil Kirk and Spock and the good Kirk and Spock.  A leopard can't change his spots overnight, but it's sure been interesting to see a good Kim Jong-in for a change!

The Media and the Left

American Thinker has a good column about leftist propaganda. It's gotten so brazen and out-of-control that I can't even watch the nightly news anymore.
Posted by Oxmyx at 4/25/2018 07:25:00 PM No comments:

When I saw this news on CNN last night, I thought I was seeing and hearing things: "North Korea says its quest for nuclear weapons is 'complete' and it 'no longer needs' to test its weapons capability, a significant development ahead of diplomatic engagement with South Korea and the United States."

I don't trust North Korea as far as I can throw it, but it was a pleasant surprise seeing something encouraging and positive coming out of that country for a change. And it was nice to hear some good things said about Mike Pompeo after his diplomatic mission there.

I hope Mike Pompeo gets confirmed as Secretary of State. When he was in Congress and would make appearances on TV, I would always stop to listen. He's intelligent, has a great resume, and he's a good choice. If the President nominating him were anyone but Donald Trump, the Democrats would vote to confirm him.
Posted by Oxmyx at 4/19/2018 08:56:00 PM No comments:

It's time for the weekly news and culture links of the week, thanks to the reliable folks at Betsy's Page, Larwyn's Linx, and Maggie's Farm!  I also like the Hot Mic column at PJ Media.

I was happy to hear that Rudy Giuliani has joined Trump's legal team - he's a good man. 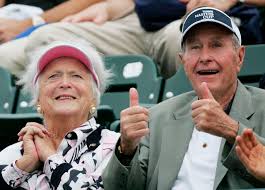 When I read only yesterday that Barbara Bush had stopped medical treatment, I hadn't even realized how ill she was, so her death today came as a shock to me, and probably to most people.

I had always admired her and had enjoyed reading her memoirs. She was a lady in an era devoid of ladies.

Thinking of the Bush family tonight, especially her soulmate George H.W. You can't think of one without the other.
Posted by Oxmyx at 4/17/2018 09:13:00 PM No comments:

Check out this week's news and culture roundups at Betsy's Page, Larwyn's Linx, and Maggie's Farm!

Bonus: I think California's status as a sanctuary state and a socialist state is proving too much for them, and they are cracking up. Here's their latest brilliant idea:  "Here’s an idea that wouldn’t survive the laughter in most U.S. communities. But this is California and more specifically, Los Angeles. So, local government is moving ahead with a plan to move some of the county’s exploding homeless populations off the streets and — wait for it — into your backyard."  Wow! I guess that means people will now be able to relieve themselves in your yard rather than in the streets!

Here we go:  "Trump: US strikes on Syria, along with UK and France, are ‘now underway’. Huge blasts reported in Damascus as president says US response to chemical weapons attack will be 'sustained'."

Obama's "red line" has been crossed too many times, and at last we're responding!  I hope Russia and Iran are paying close attention tonight.

This is a touching story: "A group of female Holocaust survivors has enjoyed pampering 'makeovers' ahead of Israel's annual Holocaust Remembrance Day this Thursday. Seventy survivors, a number representing this year's 70th anniversary of Israel's independence, were treated Monday to manicures, hairstyling and make-up as art of an event titled 'Beauty Heroines.'"

They are beautiful inside and out.

(If there are any female Nazis unfortunately still alive, no amount of makeovers could ever possibly alter their ugliness.)
Posted by Oxmyx at 4/11/2018 09:29:00 PM No comments: 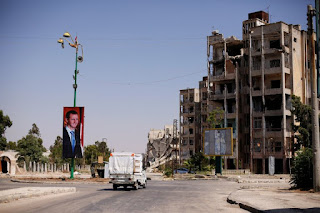 Trump was right in describing Assad as an "animal. Now he and our allies had better bomb all the facilities in Syria that contain the poisonous gas he is using against his own people -- and hopefully bomb Assad himself in the process. You see him in a dapper suit and tie while his people suffer and die; you see the photos of the destruction and the ruins, and you wonder just what it is he is holding onto.
Posted by Oxmyx at 4/09/2018 09:57:00 PM No comments:

I was sorry it wasn't Tiger Woods rather than Sergio Garcia who made an unbelievable 13 on the 15th hole today. At least the ESPN announcers were more restrained and more professional than the NBC and CBS commentators, who sound more like a cheering section. Listening to them, you'd swear that the only reason to watch any golf tournament is to see Woods. Sometimes I think they must get paid a bonus every time they mention his name, which is far too often for my liking. Recently, NBC actually asked other golfers if they were hoping Woods won if they didn't win.  I was hoping someone would give the right answer, which is "No".

The golfers I'm rooting for are Mickelson, the ever-smiling Kuchar, Zach Johnson, and Spieth, and it'd be a vindication for Spieth to win after having lost so dramatically to Danny Willett (currently tied for 55th place.) Also, you can't help cheering for Tony Finau after his combination hole-in-one/dislocated ankle.

Look at the violent border riots that Israel's having to deal with: "Ten of 16 Palestinians killed in violent riots on the Israel-Gaza border have been identified by the IDF as known terrorists. The IDF published a graphic showing the terrorists, which includes several Hamas operatives. The riots, organized and incited by Hamas, include some 30,000 Palestinians who have attempted to storm the southern border." And of course, it's all Israel's fault!
Posted by Oxmyx at 4/05/2018 08:59:00 PM No comments:

I don't blame Trump for being angry about the caravan of illegal aliens travelling through Mexico to our border.  If they try to cross into the U.S. and aren't stopped, despite all the advance warning, I think it will be the Republicans who will be blamed and the Republicans who will lose at the polls.
Posted by Oxmyx at 4/02/2018 08:43:00 PM No comments:

I just couldn't help laughing over this particular item in Argus Hamilton's latest column:  "Uber agreed to pay damages for one of its self-driving cars, which killed an Arizona pedestrian that darted suddenly into the street. It's no safer with people driving. On Tuesday a Florida woman drove her car into a swimming pool, but in her defense she had the GPS set to Teddy Kennedy's voice."