Visit Liz Sheld's Morning Briefing, Larwyn's Linx, and Maggie's Farm for some of the best posts on the Internet this week.

Respect For a Veteran

Here's a wonderful story about a community of strangers who came together to give a Korean War vet the farewell he deserved. "Rather than being laid to rest alone, literally thousands of people showed up to pay their respects as Perkins was sent to his final reward with full military honors."
Posted by Oxmyx at 5/28/2019 08:54:00 PM No comments:

Remembering the Sacrifice of Our Military

It's always disconcerting to see an Internet search result like this: "Best Memorial Day Sales 2019", so make sure you see Mental Floss, which has a list of ten things to remember about Memorial Day, or CNN, which shows some touching photographs.
Posted by Oxmyx at 5/26/2019 09:14:00 PM No comments:

I liked this nostalgic and touching Ed Morrow column titled "Memorializing Memorial Day. Growing up with what it took to keep us a free people."

It's a good read for those of us who remember those days, and who know that Memorial Day is more than just a day for shopping and sales.
Posted by Oxmyx at 5/24/2019 09:16:00 PM No comments:

The latest word from Harold Ticktin's Yiddish Vinkl is ganvenen, which means to steal. "Yiddish proverb: 'Fun a ganef iz shver tsu ganvenen/ It’s hard to steal from a thief.'  Yiddishwit.com/List.html)"
Posted by Oxmyx at 5/24/2019 09:10:00 PM No comments:

Zekelman Industries: Let's Get To Work!

What's particularly galling about this Taliban fighter's release from prison is that he is now free in the very country he betrayed. He should be run out of town and ostracized for the rest of his miserable life.
Posted by Oxmyx at 5/23/2019 09:52:00 PM No comments:

Standing Up For Our Flag

From Hot Air:  "The town elders of Statesville, N.C. have informed the owner of the local Camping World outlet that, patriotic displays aside, its 40 x 80 foot American flag is too large to fly there.

Marcos Lemonis happens to be the owner, and unlike many people in PC situations, he is neither cowed nor backing down:

"Remember Michael Corleone in the second Godfather movie? 'Senator, you can have my reply now.'
Here’s Lemonis’ reply:
'This is about more than just the flag. This is about our Veterans, Military, and the men and women that have sacrificed for this great country. They are the reason we fly the flag and they are the reason we will NOT take it down!'

A Miracle From Space

Amazing that anything survived that catastrophic explosion: "The diary of Israel’s first astronaut, who perished in the 2003 Space Shuttle Columbia disaster, went back on display in a new exhibit that opened at the Israel Museum Tuesday.

The painstakingly reconstructed page fragments that survived the disintegration of the spacecraft and its fiery crash to earth, and that contain some of Ilan Ramon’s final personal thoughts and feelings, are being displayed alongside fragments of the Book of Enoch.

The exhibit 'Through Time and Space' compares Ramon to the biblical Enoch, who the book of Genesis says “walked with God, and he was no more, because God had taken him.” The Fragments of the Book of Enoch were part of the Dead Sea Scrolls discovery that are also on display in the museum, and similar recovery techniques were used on Ramon’s diary."
Posted by Oxmyx at 5/21/2019 08:51:00 PM No comments:

Here's a news roundup from Issues & Insights, "brought to you by the team behind IBD Editorials. We unapologetically support both a free market and a limited federal government."

Bonus: Harold Ticktin's Yiddish Vinkl offers the word geshank (geh-SHAHNK), meaning gift or present.  “When this gathering was literally at the pinnacle of drinking and eating, the jester began, as best he could, to announce in a loud voice the gifts (drasha geshank) that each of the invited guests was prepared to give to the bride and groom, whether money or gifts.” (Excerpt from
Facebook post about historical wedding in northwest Belarus, facebook.com/JewishGen.org).
Posted by Oxmyx at 5/16/2019 09:25:00 PM No comments:

The Girl Who Was Smarter Than Adults

Unbelievable:  "11 year-old sent to principal’s office for telling students to stop Nazi salutes;  Tennessee schoolgirl reacts after classmates repeatedly make the Sieg Heil salute; after raising objections, she was told 'to not address it again'"
Posted by Oxmyx at 5/16/2019 09:17:00 PM No comments: 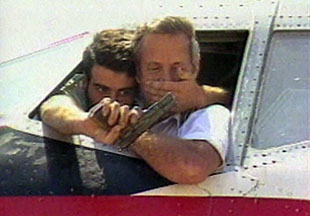 Seeing recent reports of Iran's hostility to the United States, including sabotaging four ships off the UAE makes me ill, remembering the 444-day 1979 hostage crisis at the Embassy; and remembering the hijacking of TWA 847 and the murder of Robbie Stethem. When you think of how hard Obama fought for the nuclear deal, knowing all this -- it's sickening.

Here are two recent books of nonfiction that I'm looking forward to reading:

Mitchell Zuckoff's new book Fall And Rise: The Story Of  9/11, has been excerpted in the Daily Mail.

Senator Tom Cotton has written Sacred Duty: A Soldier's Tour at Arlington National Cemetery, about his time serving with the best and the finest in the Old Guard.
Posted by Oxmyx at 5/14/2019 08:41:00 PM No comments:


Like everyone else,  I loved and admired the multi-talented Doris Day. She was a great big band singer, a comedienne, and a very good dramatic actress.

My favorite Doris Day films are both dramas:  "Love Me Or Leave Me" (the Ruth Etting story); and "The Man Who Knew Too Much", in which she famously sang "Que Sera Sera".

Time to do more reading over at Maggie's Farm, Liz Sheld's Morning Briefing, and Larwyn's Linx.

Evidently so, according to this sickening story:  "The Auschwitz Memorial and Museum has complained to an e-commerce site that was selling miniskirts, tote bags and other items printed with photos of the former Nazi German death camp where around 1.1 million people were killed during World War II.
The museum in Poland learned about the products offered on Australian e-commerce site Redbubble from people who saw them online, spokesman Bartosz Bartyzel said Wednesday. Employees were 'shocked and outraged' over what they considered blatant dishonoring of Holocaust victims, he said.
The items that caused offense were created by various designers and carried black-and-white post-war images of Auschwitz and the railway tracks leading into the Birkenau extermination camp and its gas chambers. A tote bag with a German-language warning sign at Auschwitz was being sold for 13.90 euros, a skirt with an Auschwitz image for 35 euros, and a pillow for 40.29 euros."

Imagine people creating this garbage, and imagine women paying money to actually wear a skirt with a crematorium on it.  What next, t-shirts showing the stacks of bodies? These are the same sort of amoral people who played Pokémon Go at Auschwitz.There's no decency at all.

It's not easy being Jewish. Every day, there's another outrage.

MarketWatch had an article today that I totally agreed with: "These 16 money wasters are why so many Americans can’t save for retirement; We can’t tell the difference between needs and wants and are unable to delay gratification."

(It's not "we", since a lot of us were raised to be frugal, and we know how to prioritize.)

Those 16 money wasters are:

I noticed they somehow forgot to list expensive cell phones and cell phone plans; and expensive cable TV packages with more channels than they can watch. But I wholeheartedly agree with #5, transportation -- I've never seen so many poor people driving such huge, new pickup trucks and SUVs!
Posted by Oxmyx at 5/08/2019 09:09:00 PM No comments:

Headline of the day: "42%  of American Jews Say Trump is Too Pro-Israel."

Daniel Greenfield writes, "Conservatives often ask me why, when Republicans are pro-Israel, does the Jewish vote continue to tilt toward the Democrats. The simple answer is that, like the Christians who vote for Democrats, a significant percentage of American Jews have no religion worth mentioning, no identification with the Jewish people, and would give their very last penny to fight for abortion rights, but would write off Israel in a heartbeat. Many don't like the Jewish State and their idea of being Jewish is watching Woody Allen movies or, for millennials, Broad City. This poll is damning, but not hopeless. It divides Jews from leftists with Jewish last names."

Wow! Only the Socialist Democrats would find this news depressing: "Jobs report crushes expectations, unemployment drops to 49-year low.  Quelling some fears of a widespread economic slowdown, the Bureau of Labor Statistics on Friday said the US economy added 263,000 nonfarm payrolls in April, exceeding the 190,000 that economists were expecting." How can you possibly vote against news like this in 2020?

We are definitely U.S. Steel: "U.S. Steel will invest more than $1 billion on state-of-the-art facilities in western Pennsylvania that it says will improve its steelmaking efficiency and reduce emissions at its Mon Valley Works operations, the company said Thursday."  This makes for some very happy workers, and some very unhappy Dems.

This disgusting situation continues:  "The San Francisco Chronicle published a story yesterday highlighting the city’s ongoing public pooping problem. The city will spend more than $72 million this year on cleaning the sidewalks several times a day, but that won’t be enough. The city has received nearly 6,000 reports about poop in the streets so far this year, up 7% from last year. .. A city supervisor named Matt Haney is pushing for an increase of another $12 million to get the streets cleaner. Meanwhile, the city’s mayor and public works director are saying that, at some point, the underlying behavior has to be addressed."  At some point? How about right now, before there's a cholera or typhoid epidemic? It sounds more like a Third World country than Nancy Pelosi's own city. I doubt Tony Bennett would want to leave his heart in San Francisco these days.

And speaking of disgusting, the despicable anti-Semite Ilhan Omar not only dislikes the Jews, she also dislikes the very country she purports to represent, now blaming America for the situation in Venezuela. When Pence and Pompeo rightly condemned her remarks, she made things worse by immediately resorting to the "It's because I'm a black woman" response:  "Women of color have heard this before. Instead of 'we disagree,' it's 'she doesn't know what she's talking about.' They have to make us feel small." Lady, every time you open your mouth, you make yourself look small! Shut up and sit down!
Posted by Oxmyx at 5/03/2019 08:57:00 PM No comments:

From Joshua Davidovich at The Times of Israel: "After Auschwitz, memory is barbaric: 8 things to know for May 2.  Rather than unity, Holocaust Remembrance Day presents a politicized struggle over what lessons to take from the horrors of the past to combat a bleak future."

Seen at Instapundit: "Every Pronoun Must Go".  It seems that the usual complainers find it offensive that ships are referred to as "she" and "her." They ought to refer to these female whiners as "idiot" and "moron".

Jew-haters don't want to remember the Holocaust; they'd much rather forget it or deny it actually happened.