Thank goodness it's Friday, and thank goodness we have so much news & interesting tidbits at our fingertips brought to you by Betsy's Page, Maggie's Farm, Liz Sheld's Live Blog, and Larwyn's Linx.
Posted by Oxmyx at 6/29/2018 08:05:00 PM No comments:

The latest word from Harold Ticktin's Yiddish Vinkl is getroyen, meaning to trust; confide in.

Did you know that the multi-talented star James Cagney could speak Yiddish? If not, read this amusing article! (I liked learning that "one of the Warner brothers warned a colleague about to meet with Cagney that 'der goy farshteyt yidish' — this gentile speaks Yiddish.")
Posted by Oxmyx at 6/27/2018 09:21:00 PM No comments:

I saw this 2017 article today in the New York Times Morning Brief e-newsletter:  'Headline stress disorder': How to cope with the anxiety caused by the 24/7 news cycle.

The way I cope with it is by switching to a non-news channel, one without split screens, news tickers, shouting, and footage of violent people. (And this is just domestic news, by the way!)

Is this a contest now, to see which liberal Democrat can do or say the most outrageous things when it comes to Trump and illegal immigration?  You have Peter Fonda threatening Trump's youngest son; Trump officials being thrown out of restaurants; Robert DeNiro's filthy tirade at the Tony Awards; the hateful Maxine Waters encouraging the harassment of Trump people; and now this, which should come as no surprise: "Laurence Wayne Key, a volunteer for the Democratic Party of Martin County, Florida, has been arrested after he allegedly made a call to Rep. Brian Mast’s (R-Fla.) Washington, D.C. office and threatened to kill his kids over the situation at the border." What's next, bombings and assassinations? We better hope not.
Posted by Oxmyx at 6/26/2018 08:34:00 PM No comments:

In his column titled "Illegal Aliens Fatally Separate American Parents and Children", Daniel Greenfield writes, "We have a choice to make.
Either we can detain illegal migrants crossing the border or we can let them all in. We can take the Merkel way out and hope that the family that pays the price for illegal migration isn’t our own.
There are no apologies or excuses necessary for detaining illegal aliens who illegally cross the border. Even if we set aside minor matters like national sovereignty and the rule of law, the stories of these murdered children provide ample justification for arresting every single illegal migrant.
Either we separate illegal migrants from this country. Or they will go on brutally tearing families apart. And if we allow them to use children as human shields, then American children will pay the price.
President Trump has called the media the 'enemy of the American people.' It’s not just the enemy. Its manicured hands are covered in the blood of American men, women and children. The media advocates for drug dealers, for Islamic terrorists and for illegal aliens. The more Americans they kill, the more the media cheers them on. The media’s lies aren’t just tearing apart the country, they’re killing children."
Posted by Oxmyx at 6/23/2018 08:58:00 PM No comments:

Why use the facts when you can use lies against Israel and the Jewish people - or against conservatives and the Republican party?
Posted by Oxmyx at 6/22/2018 08:09:00 PM No comments:

It was lovely to watch Fox News tonight and listen to the civility in the heartfelt tributes to this great man, doctor, writer, thinker, and inspiration. 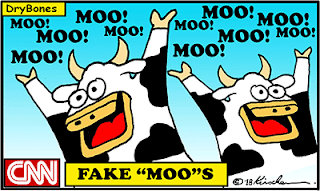 The above is from the Dry Bones Blog.  Yaakov Kirschen said what I was thinking about the media when he wrote, "I'm getting really tired about CNN's non-stop war with President Trump, so I did today's silly cartoon to make myself feel good."

And you need silliness to try to cleanse yourself after hearing about the hysteria from deranged people like Peter Fonda, whose comments resulted in a visit from the Secret Service.  I think I'll have to stop watching the news the rest of this week.
Posted by Oxmyx at 6/20/2018 08:41:00 PM No comments:

I enjoyed this comment from Liz Sheld's morning brief, as seen at Instapundit today: “The elevator pitch version of the IG report can be summarized as follows: the investigation found there was mind blowing bias among senior officials in the FBI/DOJ against Trump and his moron supporters but the officials claimed it didn’t effect any of their investigations so it’s all good.”
Posted by Oxmyx at 6/19/2018 10:21:00 PM No comments:

Look at the Daily News cover in this article, and you'll see how the liberals are portraying the illegal immigration crisis in this country.

The Republicans ought to counter by pointing out that if the immigrants don't want to be separated from their children, they should stop trying to come here in the first place.  Why don't they go to other Central American countries instead?  And why do the rights of illegal immigrants and their children seem to be more important than the rights of American citizens? We voted for our politicians to represent us, and if the Republicans won't do that, they can expect to be defeated.
Posted by Oxmyx at 6/17/2018 09:14:00 PM No comments: 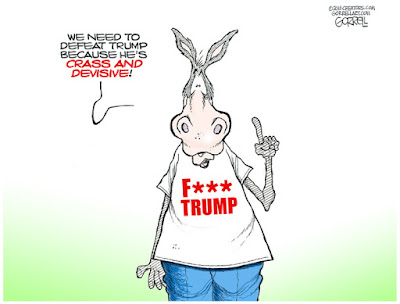 A lot to read today, including the posts at Betsy's Page, Larwyn's Linx, Maggie's Farm, and PJ Media's Live Blog. 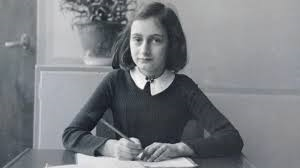 She would have been 89 years old today if she had survived the Holocaust. Instead she's frozen in time at age 15. Here's some information at VA Viper, via links at NRO's The Corner.

Holocaust survivor and educator Gena Turgel passed away last week at age 95; she helped care for Anne Frank at Bergen-Belsen.
Posted by Oxmyx at 6/12/2018 08:47:00 PM No comments:

The Beauty of Singapore vs. The Ugliness of Liberals

For all the news on the Trump-Kim summit, and on Singapore itself, go right to the horse's mouth and check out the Straits Times.

It was disgraceful, on the eve of the summit, to hear about Robert DeNiro's unhinged attack on Trump during the once-classy Tony Awards show. I'm not sure what was worse: DeNiro's filthy mouth, or the idiots in the audience who gave him a standing ovation for it.  Motus A.D. is right -- the comments at Variety are hysterical, and you can enjoy them here.

Enjoy The Week in Pictures over at Powerline.

From Yiddish Vinkl, here's a word I've never heard before, but I loved the description of how to say it: "Khnyok - it's pronounced as one syllable, a feat best managed by pretending to clear your throat and blow your nose at the same time."

Speaking of Yiddish, I finally saw the correct spelling of a word I heard a lot as a kid: oysgedart, meaning skinny and emaciated, and in our family usually used to describe an unattractive woman.
We also heard the expression "You shouldn't know from it", and online I saw Zolst nit vissen fun kain shlechts, meaning  "You shouldn't know from bad (evil)".
Posted by Oxmyx at 6/09/2018 09:24:00 PM No comments:

I was so sad to read Charles Krauthammer's moving farewell letter today and learn that he has only weeks left to live due to cancer.  I have always admired him for the life he made for himself after his paralysis, his careers as psychiatrist, lawyer, columnist, and political commentator, and his great courage.

While reading the letter, I couldn't help but remember another touching letter, Ronald Reagan's, announcing that he had Alzheimer's.

Visit with Maggie's Farm, Betsy's Page, and Larwyn's Linx for your weekly dose of interesting posts.

Here's another case of liberals with far too much time on their hands, trying to eradicate everything innocent and normal: "Australian officials are combing through children's books — and toys — in kindergartens, schools, and libraries, aiming not just to promote 'gender neutral' options but to avoid 'gender stereotyping' of any kind. At least two city councils in the Australian state of Victoria — Manningham and Melbourne, specifically — have started 'auditing' children's books, ultimately considering a kind of ban on the terms 'boy' and 'girl.'"

It certainly didn’t harm the Greatest Generation who fought on D-Day to have been referred to all their lives as “boys” and “men”, did it?

Here's some good weekend reading for you from Larwyn's Linx, Betsy's Page, and Maggie's Farm.