I love Robert A. Hall's column titled "To Be An Adult", in which he lists sixteen rules for adulthood. Unfortunately, those who pass for adults today fail miserably.

Also at American Thinker is this Randolph Parrish piece on how other countries treat their national anthems.

It's just too bad that we as conservatives and Republicans constantly have to be on the defensive and always have to show what's wrong with our culture, instead of leading by example, without apology or excuse, and showing that we are in the majority and in the right!
Posted by Oxmyx at 9/29/2017 09:17:00 PM No comments: 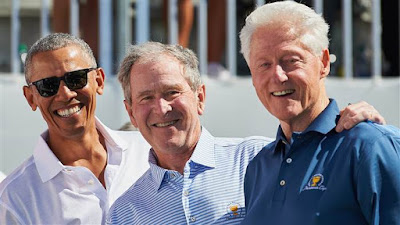 You know, if you didn't have so much contempt for Barack Obama, you might almost like him when you see these photographs!
Posted by Oxmyx at 9/29/2017 12:15:00 PM No comments:

Here are this week's news roundups, thanks to Maggie's Farm, Betsy's Page, and Larwyn's Linx.

Bonus: Scott McKay's column at American Spectator includes this great rebuttal to the disgraceful and cowardly concept of "taking a knee". It ends this way:

“When my president chastised law enforcement for their actions but ignored the violence in our streets… I didn’t take a knee.

“When my president identified the weather as the greatest threat to America’s safety while Muslims worldwide are murdering innocent people… I didn’t take a knee.

“While my president’s insistence that pacifism and reform in numerous areas of the globe would bring peace but instead led to the strengthening of those that seek to destroy us… I didn’t take a knee.

“When the election of my president broke barriers never thought possible in America but ended up being the high point of his eight years in office… I didn’t take a knee.

“In all that time I never disrespected our Country, our Armed Forces and Veterans, or our Nation. 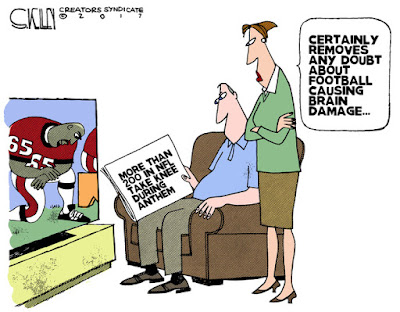 Hey Liberals! Why Don't You Form Your Own Country?

Go find land in Russia or China or the Middle East, and call it Liberalia.  You won't have any statues or monuments or flags or anthems to infuriate you; only liberal speech and thought will be permitted; any conservatives who somehow end up in your country will be sent to re-education camps. The only catch? If you end up getting bored, you are banned from re-entering the United States.
Posted by Oxmyx at 9/27/2017 08:41:00 PM No comments:

The Jets might stink as a football team, but at least they showed some character and decency as human beings over the weekend:  "They stood side-by-side linked arm-in-arm as the national anthem was sung at MetLife Stadium on Sunday. Not a single Jet took a knee or staged his own individual protest over President Trump’s disparaging comments and tweets about the NFL and its players.  The Jets had decided during a team meeting Saturday night that if nothing else, they would be unified in their message and when chairman and CEO Christopher Johnson joined them on the sideline the Jets suddenly became better than anyone could have imagined."

On the other hand, you have this:  "Many people heralded Pittsburgh Steeler football player Alejandro Villanueva as a hero for standing up during the national anthem…. Today, not-so-much.
Unfortunately, today Villaneuva says he was embarrassed to stand for the U.S. flag and National Anthem; and he apologized to his team and coach for not supporting their decision to stay in the locker room." Apologized? For doing the right thing? The only thing he should be embarrassed about is his about-face!
Posted by Oxmyx at 9/25/2017 07:49:00 PM No comments:

Differences Between Left and Right


“The left is about your race, your sex, your sexual preference, your identity, who you worship, who you don´t worship, who you want to sleep with whether you are in transit, they are all about identity politics, every decision they make, every chaos, every event they create is around one of those factors if not more.

If you haven't watched any of Ken Burns' documentary "The Vietnam War", you're missing another compelling film.  I won't be watching the reruns of this one over and over like I did "The Civil War", but this is probably the best thing on TV right now. Seeing the anti-war protesters made me as angry now as I was back then, and I can't understand why tourists would waste their money visiting Vietnam today.

Another excellent documentary was "Inside the Vietnam War", which I saw years ago on the National Geographic Channel and would want to see again.
Posted by Oxmyx at 9/21/2017 09:15:00 PM No comments:

Triumph At The U.N.

Boy, was it ever great to hear tough talk rather than apologies at the United Nations!


Joseph Klein on Trump: "The U.S. president explained his 'American First' principles in some detail and put the rogue nations of North Korea, Iran and Venezuela on notice that their misdeeds would have serious consequences.   A globalist appeaser is clearly no longer in the White House."

Netanyahu:  "Speaking directly to the genocidal leader of Iran, Netanyahu said,  'The light of Israel will never be extinguished. Those who threaten us with annihilation put themselves in mortal peril. Israel will defend itself with the full force of our arms and the full power of our convictions.'"
Posted by Oxmyx at 9/20/2017 08:53:00 PM No comments: 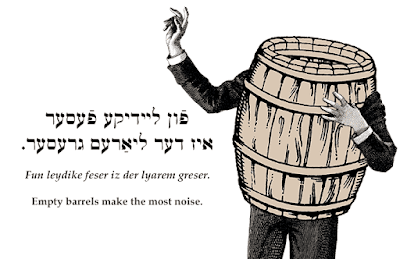 This describes the ridiculous "antifa" protesters as well as all other loud, whining, immature fools who are leaping on the white supremacist bandwagon. Their ten minutes of fame will soon run out, and they'll move on to the next fad.

For He's a Jolly Bad Fellow

It's ironic how "Chelsea" Manning was offered the title of fellow at Harvard, and it was just as strange to hear the reporters at Fox News refer to him as "she" and "her". Why legitimize him? And does anyone remember that he's a actually a traitor named Bradley Manning?
Posted by Oxmyx at 9/15/2017 08:57:00 PM No comments:

Bonus: "Folsom School Warns ‘USA’ Chant Could Send ‘Unintended Message’."  I have an unintended message for you: get out!

If you like your capitalism, you can't keep your capitalism: Of course Democrats are all supporting Bernie Sanders' socialist "Medicare for All" idea. After all, it will result in more people voting Democrat, since it's supposedly free, and free is a good thing for Democrats.  "Sanders touts his 'Medicare for all' as the solution to all our nation's health care woes. No more premiums, no more deductibles or copays, no provider networks. The government would pick up all the costs, except for possibly minimal copays for prescription drugs. Private insurance would be effectively outlawed."
The Republicans had better start preparing to fight against this with a lot more enthusiasm than they have had when fighting for the repeal of Obamacare, and fighting for Trump's agenda!
Posted by Oxmyx at 9/14/2017 08:37:00 PM No comments:

They Can't Believe They're Hurricanes!

What a wonderful story! And what a great headline: Harvey and Irma, Married 75 Years, Can't Believe They're Both Hurricanes.

Remember personal responsibility? Remember when people used to know the difference between right and wrong?  Now you just say that nothing is ever your fault, that everyone is wrong except you, and that if you don't agree that anything goes, you're evil.

The latest examples are Hillary Clinton blaming women for her defeat; and some author named Sarah Jaffe who says that cracking down on looters in Florida is of course another sign of 'white supremacy."  This lefty insanity is just another fad by angry, bored losers and will soon fade away when even the liberal media realizes how ridiculous they sound. You're supposed to be adults, so act like it!
Posted by Oxmyx at 9/12/2017 09:29:00 PM No comments:

It doesn't get any easier, even after sixteen years. I didn't hear a soul at work even mention what this day was all about, but I guess I shouldn't be surprised. Maybe they've forgotten, but I haven't.

Dear Florida, Thinking of You

I'm hoping that Hurricane Irma weakens considerably as it approaches Florida and gives those Andrew-anxious residents a break.

I'm watching as little TV news as I can, as the continual coverage reminds me of slowing down to look at an accident on the highway. We all know the hurricane is coming, and Gov. Scott should not have to keep urging people to evacuate or find shelter.  Should you really need to be told, and whatever happened to common sense?
Posted by Oxmyx at 9/09/2017 09:37:00 PM No comments:

New York Then and Now

Howie Carr asks, "Have you read enough sob stories about 'Dreamers' yet? Amazing, isn’t it, that the United States was somehow able not only to survive but also to prosper and thrive for almost 200 years before the massive invasion by the Third World began after Ted Kennedy’s Immigration Reform Act of 1965."

Walter Williams states:  "So more political power hasn't worked. Massive poverty spending hasn't worked. Electing a black president hasn't worked. What should black leaders and their white liberal allies now turn their attention to in order to improve the socio-economic condition for blacks?  It appears to be nearly unanimous that attention should be turned to the removal of Confederate statues. It's not only Confederate statue removal but Confederate names of schools and streets."
Posted by Oxmyx at 9/06/2017 09:32:00 PM No comments:

Here's a reassuring headline from USA Today: Can North Korea target a U.S. city? Experts say not yet.

Meanwhile, Slate says: Don’t Panic About North Korea. The same logic that has prevented nuclear war for decades will work on Kim Jong-un.  Are you sure? After all, Kim Jong-in is crazier than the predecessors who are been deterred for decades.

It's odd that Confederate statues are met with more outrage than nuclear weapons fired by an unstable lunatic.
Posted by Oxmyx at 9/05/2017 09:03:00 PM No comments:

What is This World Coming To?

I don't even want to turn the news on at night these days because of the ridiculous and outrageous stories that are being reported.

When they report things like the following as if normalcy is a bad thing and a loud and aggressive minority is in the majority, you're left convinced that the media wants one and only one way of thinking: the ultra-liberal way.

Item: "The organizers of the Columbus Day Parade are continuing their fight in defense of the Christopher Columbus statue in Columbus Circle.  A commission to be appointed by Mayor Bill de Blasio will perform a 90-day review of monuments and memorials that may cause offense, and the 76-foot tall statue of the explorer has not been exempt, meaning it could potentially end up on the chopping block."

Item: "A first grader at a California charter school was sent to the principal’s office this week after she accidentally 'misgendered' a classmate in what’s being called a 'pronoun mishap.'  The incident occurred at Rocklin Academy, a school roiled by controversy after a kindergarten teacher led an in-class discussion on transgenderism that included a 'gender reveal' for a little boy who was transitioning to a little girl.  For kindergartners."
Posted by Oxmyx at 9/01/2017 09:37:00 PM No comments: