Here are two items from the humorist's recent column:

"San Francisco's planned counter-protesters last weekend included hundreds of radical leftists and hood-wearing communists called Antifa. It's supposed to be a nickname for anti-fascists. I'm sorry, but Antifa sounds like a woman on Maury Povich who's trying to find out who her real father is.

Charlottesville covered up the Confederate statues deemed so offensive to leftist demonstrators Friday. Next, animal rights activists will gather in Manhattan for a huge protest to demand the removal of the Empire State Building. They say it is a constant reminder of the murder of King Kong."

Day of Remembrance and Mourning

The anniversary of the traumatic September 11 terrorist attacks is approaching, so I thought it important to link to these haunting photos from that terrible day.

Here's a list of ways you can help the victims of Hurricane Harvey. I sent a donation to the Jewish Federation of Greater Houston.
Posted by Oxmyx at 8/29/2017 09:08:00 PM No comments:

Unbelievable:  "Can a college's animal mascot be a symbol of racism? According to some students at USC, the answer is 'yes.' The USC horse mascot, named Traveler, is under fire for having almost the same name as the horse that Confederate General Robert E. Lee rode. Lee's horse was named Traveller."

These idiots are just trying to see how seriously their demands are taken and see if the authorities will continue to kowtow to this nonsense.. If the university actually panders to this sort of infantile behavior, they're the ones who are the idiots.
Posted by Oxmyx at 8/26/2017 09:28:00 PM No comments:

The BDS is On The Other Foot

"Evangelical leader calls for boycott of Roger Waters concert.  'Roger Waters is a global symbol of Jew hatred that should not be welcome in Nashville or anywhere else in the United States of America', said Laurie Cardoza-Moore, president of Proclaiming Justice to the Nations, a non-profit organization established to educate Christians about their biblical responsibility to stand with their Jewish brethren and Israel."   Oh well -- unfortunately, Waters isn't a white supremacist or a lover of history, otherwise there'd surely be protests and rioting in the streets.

Censorship for Dummies; or, Shut Up, Y'All! 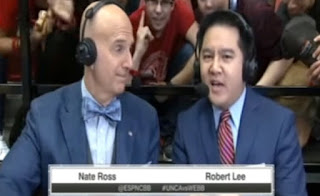 Is this insane, or what?  "ESPN has removed an announcer from its broadcast of the University of Virginia’s first football game next month because he has the same name as a Confederate general memorialized in statues that are being taken down across the country.


The network announced late Tuesday that the announcer, Robert Lee, a part-time employee who calls about a dozen college football and basketball games a year for ESPN, would no longer participate in the broadcast of the Sept. 2 game in Charlottesville, Va., which became the center of violent clashes this month during a white supremacist gathering."

Notice the photograph. Robert Lee is the one on the right. I'm not sure, but he looks Asian. He isn't Robert E. Lee. He's not a Confederate general. He didn't fight for the South in the Civil War.

If these sniveling babies can't tell the difference between a man with the common name of Robert Lee and a Southern hero revered by his troops over 150 years ago, we have even worse problems than we thought. What next, firing anyone named Grant, Sherman, Sheridan, Jackson, Davis?  What about people with the last name White -- is that racist? How whiners like this can ever hold down a job or deal with real life problems is beyond me.

It's the silent majority again: "Poll found that 54% of American adults said Confederate monuments ‘should remain in all public spaces’, while 27% called for them to be removed."

Could It Be Terrorism?

"The Navy will investigate whether two US destroyers were hacked before they collided with merchant ships in a pair of recent crashes, according to a top Navy admiral."


It's a horrible thought, but if you can kill people by using jet planes to fly into buildings, and if you use cars as weapons to drive into crowds, why not use ships to hit other ships to cause destruction and death?
Posted by Oxmyx at 8/22/2017 08:50:00 PM No comments:

The word "awesome" is badly overused these days, but today's eclipse definitely fit the bill, and my $2 glasses did the trick (although my neck is killing me).  It was very nice to participate in a shared experience like that.  A Washington Post headline says "We are all just mind-boggled", and that's the truth!
Posted by Oxmyx at 8/21/2017 07:29:00 PM No comments:

For the latest and greatest posts on the web, visit Maggie's Farm, Larwyn's Linx, and Betsy's Page.  I always feel better when I read that so many others feel the same way I do.

Also, make sure to read Daniel Greenfield's excellent column Weimar America,  in which he discusses the fact that "Those who fail to learn from history are doomed to cheer on Communists and Nazis punching each other in major American cities while civil society disintegrates around them."  He's such a good and smart writer.

Yep, ISIS sure is on the run, this time to Spain, and they definitely are contained. In their latest drive & kill attack, that old J.V. team of Islamist Nazis just killed 13 and injured 100 people in Barcelona. I'm surprised the media hasn't blamed Trump for this, too.
Posted by Oxmyx at 8/17/2017 09:37:00 PM No comments:


Enjoy the Arrival of the Queen of Sheba, another famous piece by Handel. It's always amazing to think that some of the greatest music was written and performed in the 1700s, before any modern conveniences and shortcuts. Instead of watching TV, playing video games, and obsessing over Facebook all day long,  writers, musicians, and composers had imagination and eloquence.
Posted by Oxmyx at 8/15/2017 09:57:00 PM No comments:

The humorist's latest column is filled with comments on the news, such as this item: "Charlottesville was the site of a riot between white nationalists who wanted to preserve a statue of Robert E. Lee and leftists who wanted to remove it. The riot may have saved millions of lives. The rules of engagement state that we cannot start World War III until we are done fighting the Civil War."

I heard that police in Charlottesville were ordered to stand down. During the Baltimore riots, it was proven that the cops had received such an order. Why would you prefer looting and rioting rather arresting the violent protesters and restoring order? It's as if the liberals want maximum damage -- and maximum media coverage.
Posted by Oxmyx at 8/15/2017 06:01:00 PM No comments:

I am really sick and tired of seeing people looting and rioting and protesting all the time! Can't they find anything better and more constructive to do with their time? This also gives our enemies more propaganda  to use against us.

The KKK and the white supremacists are a disgraceful embarrassment in this day and age, and the violent protests in Virginia just gave them more attention than they deserved.  The best response to their rallies should be no response at all, and no media coverage at all.

The toppling of a Confederate statue was also embarrassing. The Civil War happened, whether you like it or not.  It's part of history, and I don't see why a harmless statue should affect anyone in America today. What other statues and monuments will be defaced or destroyed next, and where will it end?
Posted by Oxmyx at 8/14/2017 09:58:00 PM No comments:

Without saying a word, these wonderful editorial cartoonists say it all.

This one's by Gary Varvel. 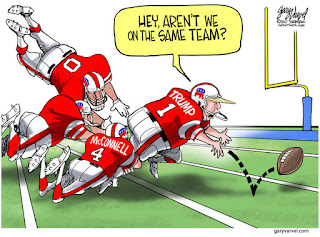 And here's one by Michael Ramirez. 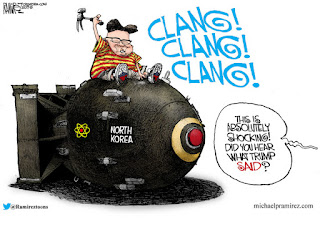 "Attendees at a Rotary Club meeting in Kentucky gathered on Monday to hear Mr. McConnell explain why Republican lawmakers have been unable to deliver major legislative accomplishments for the president. The senator pushed back against the perception that his leadership and colleagues are inept by focusing on 'the complexity of legislating.'
'I’d ask for a show of hands, but I know everybody’s saying, ‘been there, haven’t done anything,’ which I find extremely irritating — and I’m going to tell you why,' the senator said. 'A Congress goes on for two years. Part of the reason I think that the storyline is that we haven’t done much is because, in part, the president and others have set these early timelines about things [that] need to be done by a certain point.'"

Excuses, excuses! I expected this sort of whining from the Democrats, but to hear it from Republicans is even more unseemly:  Trump has ‘excessive expectations’ for GOP Congress, complains McConnell. What's wrong with "excessive expectations"? What's wrong with trying to ram through the legislation you consider important, the way real leaders like LBJ did? When you hear Mitch McConnell, you'd swear he were a Democrat, and it's disgraceful. If anything is "extremely irritating", it's this sort of complaining.

For the important stories of the week, visit Maggie's Farm, Larwyn's Linx, and Betsy's Page!

Bonus: Prince Philip retires from public engagements -- at the age of 96. I wish we could all be this spry. Note that he was walking without a cane and standing bareheaded in the rain.

This Instapundit post says we ought to repeal and replace some Republican senators.  Unfortunately, I have to agree.  They've been a big disappointment.

And here's a very entertaining article seen in the May issue of Reader's Digest:  "Before Noel Santillan became famous for getting lost in Iceland, he was just another guy from New Jersey looking for adventure, armed with the modern traveler’s two essentials: a dream and, more important, a GPS unit."
Posted by Oxmyx at 8/03/2017 06:33:00 PM No comments: